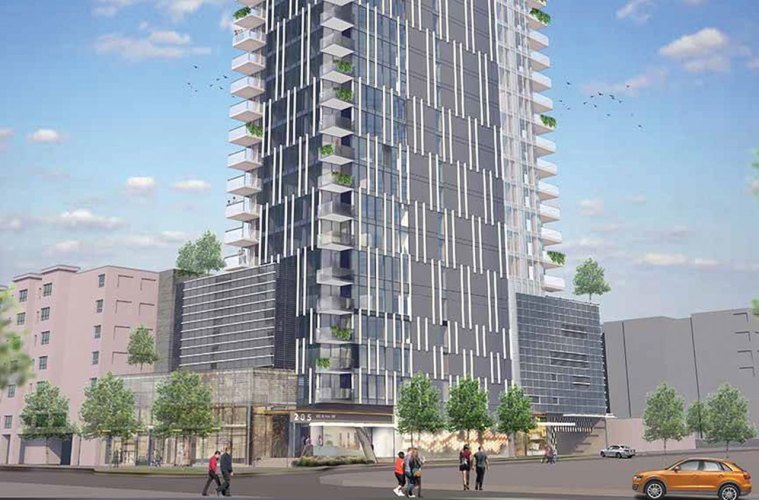 Almost exactly one year ago, Bosa Development paid $11 million for the Sushi Maru site in downtown Bellevue, at 205 105th Ave. N.E. Prior plans filed with the city indicated another condominium tower for the site, which is immediately north of Bosa’s One88, which is mostly sold out and nearing completion (occupancy is expected next year).

The second condo tower has now entered design review with the city. It’ll have 21 stories, 77 units and 137 underground parking stalls on two levels. As with One88, Amanat Architect of Vancouver, B.C., is designing the project.

A public presentation of the unnamed tower will be held at 7 p.m. Thursday, Aug. 22 at City Hall, 450 110th Ave. N.E. The public comment period ends that same day. The city says that a SEPA determination of non-significance is expected.

The city lists the project at 138,450 square feet, which probably excludes the parking.

Bosa hopes to start construction next year, and it typically acts as its own general contractor.

Both the new tower and the 21-story, 143-unit One88 will be walkable to Downtown Bellevue Station, where light-service will begin in 2023. Both are also close to Bellevue Square and Lincoln Square. Bosa also has a third site lined up—presumably also for condos—on the Park Row retail complex on the west side of Bellevue Way Northeast, which the developer purchased this February for $36 million.

Bosa’s biggest local project remains the 58-story 3rd & Cherry condominium tower on the vacant downtown Seattle block at 601 Fourth Ave. No permits have been issued there, but the project received a favorable recommendation following it fourth design review in June.

This was originally posted on djc.com by BRIAN MILLER.