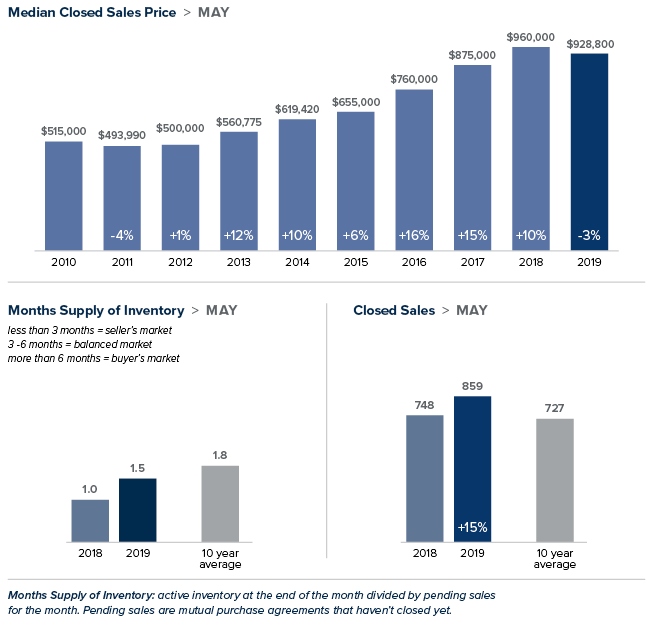 The pace of the housing market gained momentum in May, bringing an uptick in open house traffic and offers. A drop in interest rates and increased inventory were great incentives for buyers. Despite the increase in supply there is less than two months of inventory available – half the national average and far short of what is considered balanced. Industry experts are predicting a strong market as we segue into summer. 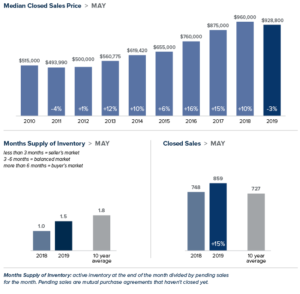 The median price of a single-family home on the Eastside was $928,800 in May, down 3% from the same time last year and virtually unchanged from April. With a booming economy that continues to grow, news of Amazon’s expansion in Bellevue, the latest Microsoft acquisition and plans for a $1.2 billion office park in Redmond, demand for housing on the Eastside is unlikely to decrease any time soon. 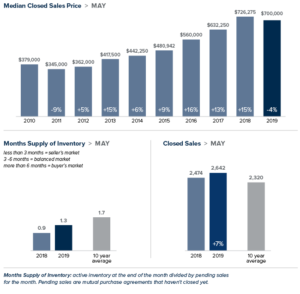 Home sale activity in King County was brisk in May. According to a Windermere analysis, 7 out of 10 properties sold last month had 15 or fewer days on the market. More than half of the homes sold at or above list price. The median price of a single-family home was $700,000. While down 4% from the same time last year, that price was up about $22,000 from the previous month. Home to the fastest growing economy in the country,  King County is expected to draw even more buyers to the area this year. 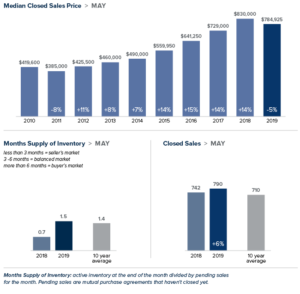 Seattle employment continues to grow faster than in most of the country.  This has made the city a top location for workers, particularly millennials.  Demand has put a strain on available homes, reducing the supply to just seven weeks of inventory available. May home prices in Seattle were lower than they were a year ago, but showed a healthy increase from the previous month. The median price of a single-family home was $784,925 in May, down 5% from a year ago and up $30,000 from April. 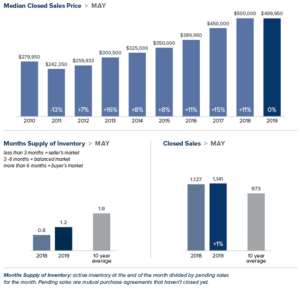 In May, the median price of a single-family home in Snohomish County was $499,950. That number remains unchanged from a year ago, and also unchanged from March and April. Despite a 44% increase in inventory, the supply of homes for sale in this area is even tighter than in King County.  Brokers report that buyers are being drawn from King County and willing to trade a longer work commute for more affordable housing.