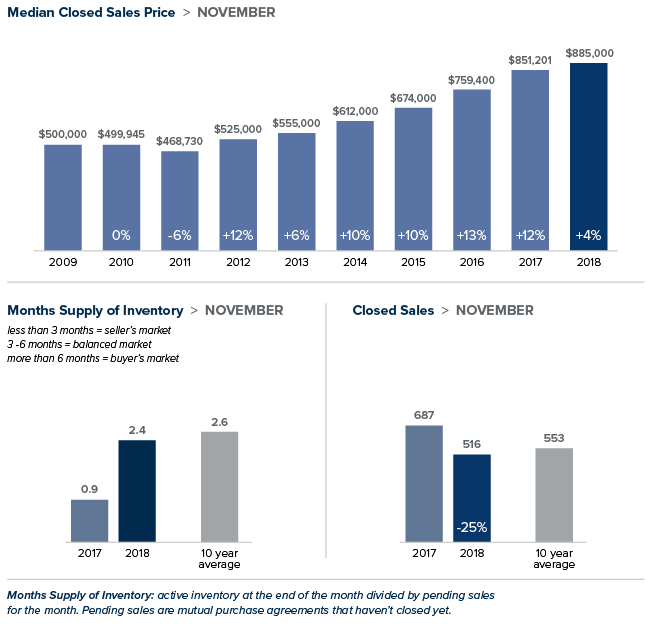 The real estate market continued to improve for buyers in November. Interest rates dropped slightly, price increases slowed and inventory soared. It’s important to note that inventory increases, while significant, are being compared to the record low supply of last year. We’re still far short of the inventory needed for a truly balanced market, however buyers have greater choice and less competition than they’ve had in years. Sellers who price their home according to current market conditions continue to see strong interest. Heading into the holiday season, there’s something for everyone to celebrate.

The Eastside economy continues to be very strong. Heavy investment in commercial construction from companies such as Vulcan boost expectations that the area will continue to thrive. The median price of a single-family home in November hit $885,000 on the Eastside. Although an increase of 4 percent from a year ago, home prices have remained steady since this fall. With continued demand and only 2.4 months of inventory, the market has a long way to go to becoming balanced. 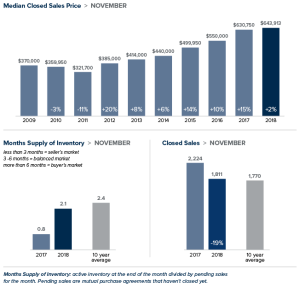 Price increases continued to slow in King County. The median single-family home price was $643,913 in November, an increase of 2 percent over a year ago. South King County, where the most affordable homes in the county are located, saw significantly greater increases compared to a year ago. North King County also posted greater increases than the county overall. Inventory has skyrocketed as the number of homes for sale in King County more than doubled year-over-year. While that’s good news for buyers, there is only 2.1 months of available inventory in the county, slightly down from October and not nearly enough to meet demand.

The median price of a single-family home in Seattle was $760,000 in November. This is up 3 percent from a year ago and slightly up from October. Inventory jumped 177 percent year-over-year however, at just two months of supply, the Seattle area has the tightest inventory in King County. With the city’s strong economy and lifestyle appeal, that’s not expected to change any time soon. Forbes recently named Seattle as the best place for business and careers in the nation. U.S. News & World Report ranked the University of Washington among the top ten universities in the world with Money Magazine rating Seattle the #5 Best Big City to Live In.

Inventory in Snohomish County continued to climb, surging 88 percent in November as compared to a year ago. That said, the area has fewer homes for sale than King County with just 1.8 months of inventory. This is still far short of the four to six months of supply that is considered a balanced market. The median price of a single-family home sold in November was up 6 percent from last year to $470,000, virtually unchanged from October.